Jamie Green is a champion professional racing driver who has represented Mercedes and Audi at the highest level in touring cars and sportscars.

Leicester-born Jamie started his racing journey in grassroots short-oval stock cars and quickly showed the skills that would earn him 17 wins in Germany’s prestigious touring car series for manufacturers, the DTM, by sweeping to the 1992 Brisca Ministox British Championship title. The natural next step was into karts, and aged 14 Jamie marked himself out as a future star by finishing second in the 1996 British junior TKM series.

Where today it is common for drivers to step into cars in their teens, such championships were few and far between at the turn of the millennium, and Jamie remained in karts until the brink of his 20th birthday – winning the 2000 Formula A winter title before placing second in the full British Formula A championship in 2001.

Forgoing the traditional training ground of Formula Ford, his long-awaited car racing bow came in the 2001 Formula Renault UK Winter Series, joining Fortec Motorsport. Proving a quick learner, a trait that has helped him throughout his career, Jamie soon got to grips with the slicks and wings single-seater and remained with the team for the full season in 2002. He scored two wins that year to finish a remarkable second in the standings.

Completing a whirlwind debut season in cars, he became the latest recipient of the McLaren Autosport BRDC Award, following in the footsteps of previous winners including David Coulthard, Dario Franchitti and Jenson Button. As part of his prize, Jamie would be given the opportunity to test a McLaren Formula 1 car in 2004, leading to a simulator driver role with the multiple title-winning team.

His showing in a Mercedes DTM car as part of the MABA evaluation tests was so impressive that Jamie was courted by the Stuttgart brand for his graduation to Formula 3 in 2003, while the Renault Driver Development Programme also made an approach. But signing instead with Carlin for a season in British F3 proved the right choice for Jamie, as he won the first two races at Donington Park on his way to second in the points.

By the end of the 2003 season he was a fully-fledged Mercedes driver and had branched out into the F3 Euroseries with its crack ASM team, scoring a podium on his first weekend at the tricky Pau street track. It proved the ideal foundation for a title assault with ASM in 2004, and Jamie duly delivered in dominant style. Against a competitive field comprising three future Formula 1 Grand Prix winners, two of them becoming world champions, Jamie finished the season with a season-high tally of seven wins to end up 51 points clear of his nearest rival.

For 2005 his career moved away from single-seaters as Jamie began his long affiliation with the DTM. Driving a Persson Motorsport Mercedes, Jamie twice qualified on pole and earned a seat at the top HWA team for 2006. He took four more pole positions that year before breaking his win duck in 2007 with back-to-back victories at Barcelona and Hockenheim.

Over the next five seasons, Jamie won at least once each year, proving a specialist at the tricky Norisring street track with four victories and a second place. His wins in 2009 and 2010 were all the more special for coming in older-spec machinery, while his 2012 triumph came with a bold pass on the final corner of the race. It was a fitting way to win his last DTM race for Mercedes, before making the bold switch to Audi for 2013.

Learning a new car philosophy and establishing himself against the marque’s stalwart drivers who had for so long viewed him as a rival was expected to take time, but Jamie didn’t take long to settle in. He scored a pole position and was a regular podium visitor in his first two seasons before the floodgates opened in 2015, his second season with Team Rosberg.

Jamie won three of the first four races in his most statistically successful DTM season, finishing the season as the best-placed Audi driver in second, with five wins in total. He was even closer to the title in 2017 but finished just six points off the summit in third - his third consecutive year inside the top three - after registering three wins.

The same year, he branched out into GT racing alongside his DTM commitments with outings in the Blancpain GT Series (now known as GT World Challenge Europe) - including making his first of four starts in the Spa 24 Hours - before taking in rounds of the ADAC GT Masters, Italian GT and the Nurburgring-based VLN Series (now called NLS). He also enjoyed a first experience of electric motorsport, testing for Audi’s Formula E team.

Jamie remained competitive after the DTM’s switch to turbocharged engines for 2019 was combined with a reduction in downforce, scoring a win and a further five podiums in Audi’s final two seasons in the series.

He set up the Jamie Green Racing karting team to give something back to the sport from which he has taken so much. Overseeing a team of mechanics and getting stuck in with the spanners himself, he enjoys coaching young drivers to find improvements in laptime.

A husband and father of three, Jamie is a passionate cyclist and golf-player. 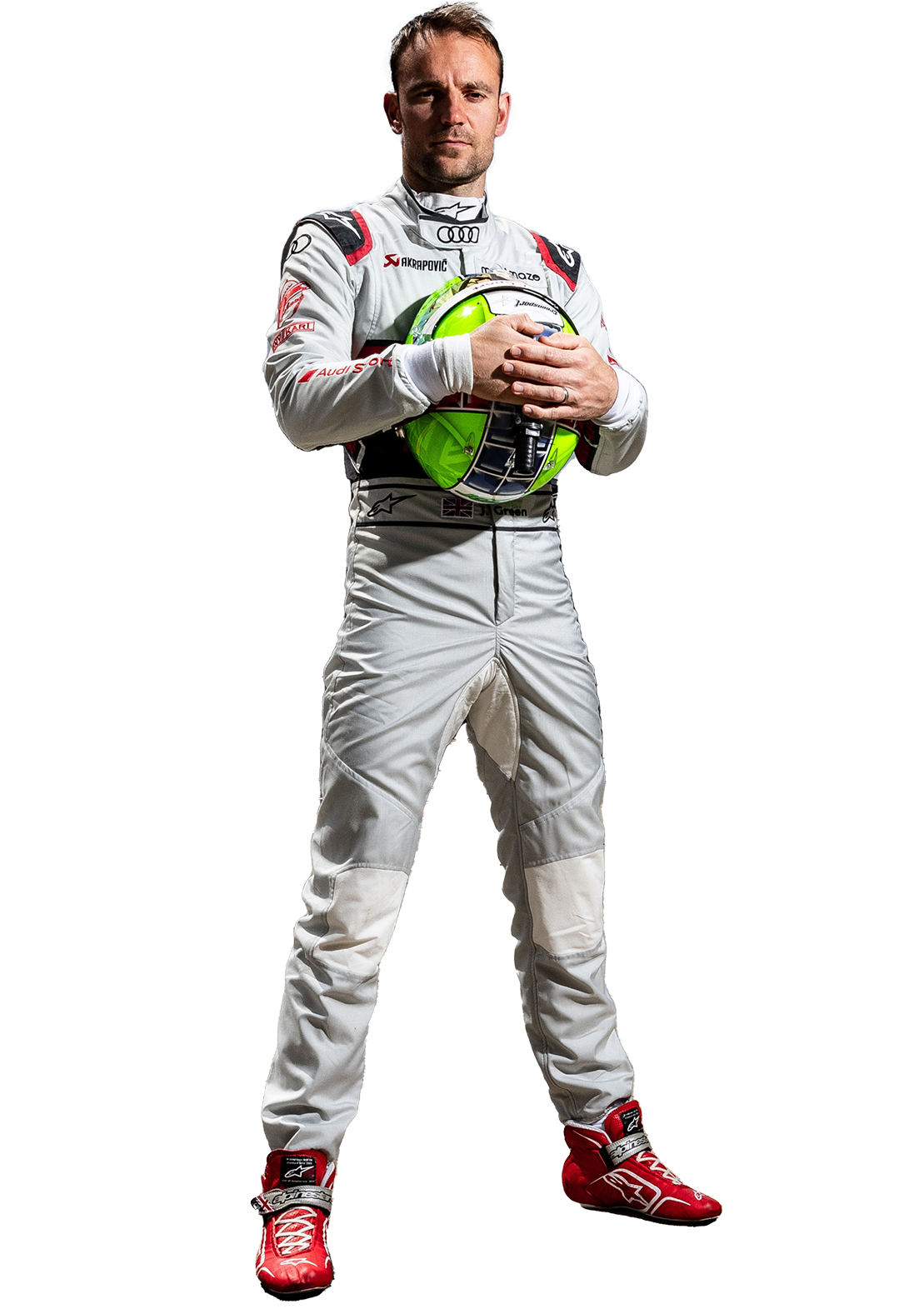 For Jamie Green, motorsport and family are side by side on the front row of the grid, with his wife Ginny, his sons Zachary and William and daughter Georgiana clearly occupying pole position.

“My three kids manage to clear my mind in a very short period of time, just with a laugh or by asking me to play,” says Jamie. “They don’t care whether daddy has just won or finished in last place –that puts a lot of things back into the proper perspective."

If you would like to see images covering Jamie's racing career, hit the button for access to the photo gallery.
View Gallery